The rise of the “Globohomo” art style
link

The rise of the “Globohomo” art style

You’ve probably seen this flat illustration style everywhere from Google, Facebook, Airbnb to pretty much most of the tech companies.

Facebook was one of the first big companies to push out these new illustrations throughout their site. The illustration system, developed by an L.A.- and Brooklyn-based design firm called Buck, is simplistic usually vectorized flat, minimal art style, of joyful cartoon people who are always in motion, running, dancing, or doing something creative.

The characters are depicted by disproportionately shaped bodies. Huge feet, small heads and hands, a variety of bright pastel color skin, sometimes holding a big object like a paintbrush. The designers from Buck called it “Alegria,” which is Spanish for “joy”.

Facebook needed a consistent illustration system that signals positivity, is inclusive, conveys the messages that they want to spread, and is cheaper to produce. Considering production timelines and tighter budgets, editorial illustrations were just not the right move.

The flat, minimal style would be ideal for the sake of replicability, meaning, many artists can work and contribute while keeping the look and feel of the characters consistent.

Soon, other companies adopted this trend and started using the Alegria style because of its simple, scalable nature. 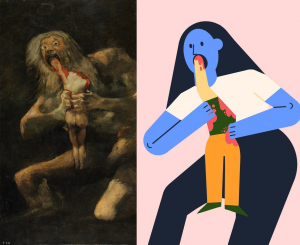 With the Cambridge Analytica scandal and other immoral misconduct by other large organizations, the Alegria style with its cheerful minimalism was masking something more sinister. The Aelgria style was an easy way to appeal to the growing public awareness and discontent towards “Big Tech” and its “Comedy Mask”, bu hiding the companies true intentions and pushing hidden agendas.

For some, now it seems to suggest a culture of anti-individualism, or interchangeability, which from a corporate view is pretty much how consumers are perceived. Now associated with large companies and sociopolitical organizations that push for a globalized and homogenized society devoid of social and cultural identity, a perfect consumer… 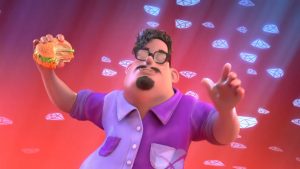 Recently, some companies started to move away from the Alegria style, and are trying to disassociate themselves from the negative political predicament.

It seems that the new squishy 3D style is no exception to critique, most notably the GrubHub commercial.

It’s not Alegria’s fault for the growing hate. It’s certainly not badly designed, it’s everything you expect for a modern graphic design. In the end, it’s how it’s used and who is using it.

Designing on a different hue