One of our team members shared this post which goes into detail why the creator community needs to reward quality artwork over quantity. He has an interesting observation which is: 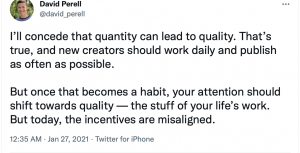 Most people never get to the point where they can create art without large amounts of friction. Amateurs usually have visions of grandeur and talk a big game, when it comes to putting in the work to build those key habits, they always have an excuse.

The amateur worries about perfecting every sentence before they learn how to put pen to paper. They let their imaginations run wild and as a result, never get to the point where they need to execute.

Undisciplined imagination is usually the obstacle that gets the amateur stuck.

At our company, one of our core values is being learning machines. We have several processes in place that promote the creation of systems rather than vague goals. Yet, very few people build the habit of building their skills on a day to day basis.

The large majority of people need to focus on putting in the reps and focus on quantity rather than quality. Only when you have achieved the point where you can discipline your imagination and have learned the skills to direct your creative energy does one aim for quality.

Unfortunately, most people live life in reverse and never build the habits ever to do epic work.

📚 How to Fail at Almost Everything and Still Win Big

Scott Adams is a brilliant author and I enjoy all of his creative work from the cartoon series Dilbert to the many books he has written. In this book, he goes into the importance of building systems over goals. Providing examples from his own life which help to solidify the important principles.

Components of a Winning Attitude